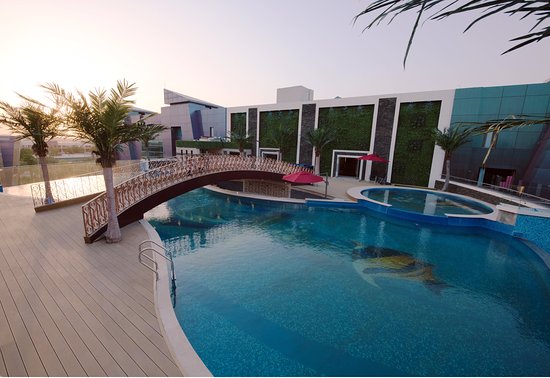 Lahore, Pakistan’s second-largest city and the capital of the Punjab region, is often regarded as the country’s cultural and spiritual center. The existence of numerous significant Mughal-era mosques, walled gardens, mausoleums, and a fort suggest a medieval city. All of this contributes to a robust tourism infrastructure, in Lahore hotels regarded as among the best in the country. So, where should you stay Hotels in Pakistan? You don’t need to look any farther than our guide.

Avari Hotel Lahore is known for its warm design

The Avari Lahore’s rooms are warm and comfortable, with sienna and milk tones, symmetrically patterned rugs, and Pakistani artworks. There’s a spacious outdoor pool that’s tastefully illuminated into a welcoming aqua blue in the evenings, and the gym’s cardiovascular machines and weights make staying in shape on the road simple. This is fortunate because the Avari has five restaurants, a coffee lounge, and a bakery to choose from.

The Pearl Continental’s magnificent open-plan interiors are a defining feature, with the odd classic vehicle or grand piano sitting on polished marble floors in a vast lobby designed to inspire awe. The design is effective and is not limited to the foyer or banquet hall. Room sizes start at 322sqft (30sqm), which is large enough to feel sumptuous – especially when daylight pours in through the floor-to-ceiling windows. Some of the suites here are almost palatial.

Lahore has grown so quickly that what was once a country club is now surrounded by wealthy suburbs, yet the Defence Raya Golf and Country Club preserves its rural beauty and premier golf links. After all, that is the primary purpose for being here – though there are three tennis courts if you prefer to swing anything other than a club. Many of the accommodations have views of the 18-hole golf course, and many tourists come expressly for lunch and dinner at the Place, a great on-site restaurant.

The Nishat Hotel is known for its sophisticated interior design

The Nishat has made such a name for itself in Lahore that a second location near the city’s Expo Centre has been opened. This Gulberg lodging, on the other hand, is the original and continues to carry the flame admirably. The modernist interior design, which gives this hotel a boutique vibe through its abstract chandeliers – composed of wire cubes over a chequered floor in the lobby – is at the heart of its lasting popularity. Therefore, such audacity is replaced in the rooms by peaceful refinement in grey and cream tones.

The Residency Hotel is known for its understated elegance

The Residency is a great place to stay in Lahore if you want to get away from the noise and heat of the city. High-ceilinged rooms with wainscoted walls are delightfully minimalist, with Persian-style rugs on parquet floors bathed in soft light. Therefore, a full-size gym, a 10m (33ft) outdoor pool, and a spa with sauna room and jacuzzi are luxuries worthy of any world-class hotel.

The Raj-era core of Lahore is a green place dedicated to the ruling classes’ patronage and delectations. With the colonial past long gone, this was one aspect of the city that stayed mostly unchanged. Along with the city’s racecourse and botanical gardens, which continue to draw visitors. Faletti’s Hotel, which first opened its doors in 1880, is a component of this historic finery. As a result, the rooms are well-proportioned, with even the most basic being larger than a suite in most hotels.

Park Lane Hotel, for a new haircut while you’re there

The higher floors of Park Lane Hotel have some of the best views of Lahore. But none compare to those from the rooftop pool and hot tub. It’s not the only uncommon feature for a Lahore hotel. An on-site barbershop is a good location to get a shave or trim, and the modest exercise facility is excellent for anyone trying to keep in shape while on the go. The rooms are modernly furnished, and the suites have their own hot tubs.

For modern conveniences, stay at the Luxus Grand Hotel

The Luxus Grand is one of Lahore’s newer ritzy hotels, with rooms intended to meet current needs and expectations. This is especially true of the LED-strip lighting constructed around the headboard of the bed and into the ceiling. Which gives the hotel a modern vibe. While maintaining a sense of warmth and welcome. Some suites include a whirlpool hot tub and lounge area. While a pool is cleverly crammed into a ground floor space between the lobby and rooms.

Do you need to catch an early flight? This hotel is ideal for staying in Lahore because it provides quick and easy access to Allama Iqbal International Airport. The communal areas are a stylish mix of white tile and natural greenery, and the whitewashed exterior is bathed in green light during the night. A nod to the colors of Pakistan’s national flag. The rooms are fresh and tidy, ensuring a restful night’s sleep — whether before or after a travel.