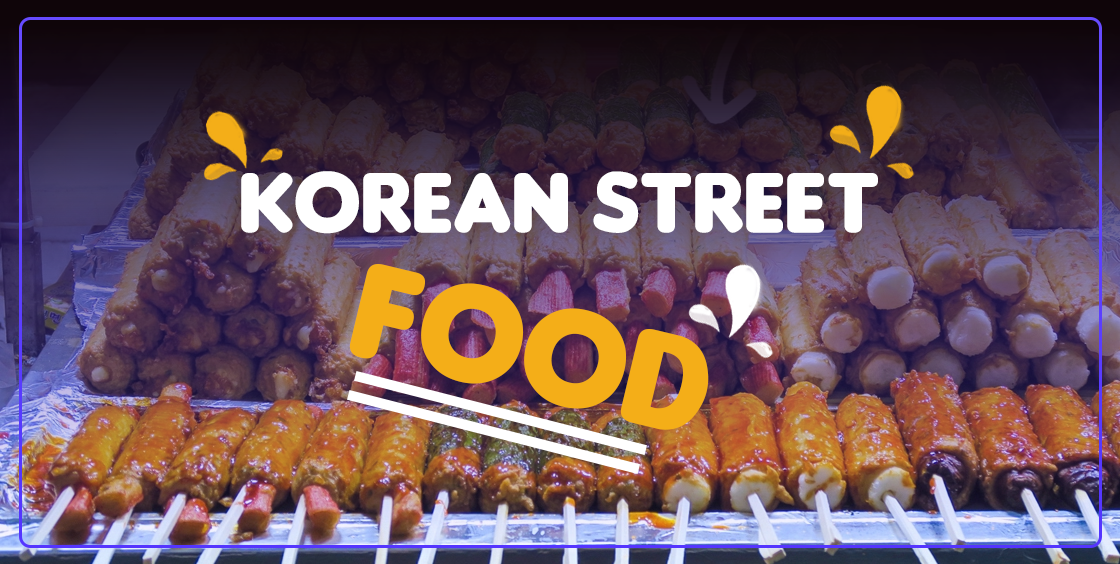 Every foodie must have Odeng in their repertoire. Skewered fish cake served with broth. Because fish cakes can find everywhere in Seoul, you don’t need to worry about finding them.

Gyerranppang is the Korean word for egg bread. A muffin-like appearance, an egg on top, and an unexplainable odor, whether savory or sweet, make this an easy way to ruin a diet. The best part is you can get it almost everywhere in Korea. It makes a great breakfast, lunch, snack, and dinner. A trendy street in Seoul, Myeongdong, has many stalls selling egg bread.

The Korean street food corn dog is similar to the usual hotdogs, but it’s coated with batter. However, Korean corn dogs are unique because they come in all shapes and sizes. From a corn dog shaped like an octopus to a french fries-shaped dog, they have it all.

Hotteok, or stuffed pancake, is a Korean street food name. The sweet Korean pancake has cinnamon, dark brown sugar, and chopped peanuts. In addition to savory fillings, there is kimchi and japchae.

Korean fried chicken, yangnyeom tong dak, is no longer an ethnic cuisine. One thing that makes Korean fried chicken unique is the crispy, paper-thin skin that shatters upon biting into it. Usually, Korean food is served in a cup, but some Korean restaurants serve it also.

Korea’s street food ranges from spicy rice cakes to desserts such as buttercream gateaux. Here’s a list of the best Korean restaurants.

With sweet chili or soy and garlic, Sam Sam’s wings are fried crisp and served chilled. Spicy red peppers with snow cheese or lemon mayonnaise are available here. You can choose between Kirin, Max (Korean) and Furphy, or Asahi from a bottle. Soju-Ritas combine zesty ice granita with a bottle of soju.

You can also try deep-fried cheese skewers at Chunky Town. The Korean version of a hot dog is crunchy and crispy, drizzled with sauces, and adorned with K-pop stamps. You can also try pairing mozzarella with mayo or ketchup. Another option is the Just Cheese Chunky, which does not come with it. Chunky Town is located at QV.

Busan’s dessert café, Sulbing, is famous for its bingsu. To craft snow ice, ice cream, or yogurt, flakes are finely shaved. It is the toppings that make the pizza so delicious. There are many choices; dark chocolate Oreo Monsters, tiramisu cheesecakes, and rockmelon with red bean sticky rice cake. Fans of tteokbokki pizza will drool over the cheese goodness served hot in a skillet.

The Seoul Station at Melbourne Central serves more Korean takeaway hot dogs. These deep-fried sausage pops are coated in crunchy ramen noodles or potatoes. They also do K-hotdog crumb. You could also use potato batter instead of sausage and melt mozzarella on top. Add sugar to get the authentic Korean flavor. Pour two sauces (or less) to finish—cheese, mustard, honey mustard, ketchup, mustard, and honey mustard.

Sinjeon is the perfect place to start your Korean street-food adventure. It’s the premier place for Seoul’s number one snack, tteokbokki (pronounced ‘doe-bok-kee’). The sweetly spiced rice cakes are packed with heat from the chili—dip fishcakes in the sauce before serving. Add melted cheese on top. Of course, there’s much more on the menu at Sinjeon, including kimbap (Korean sushi), fried chicken, and bibimbap.

What are the best Korean dishes?

A stall on the Korean streets or an excellent Korean restaurant can find food for every taste. Here’s a list of Korean street foods to try:

How much does Korean street food cost?

What is the best Korean street food?

It varies depending on personal taste. Odeng and tteokbokki are their most popular names.

In Korea, how much does tteokbokki cost?